Campbell Transport cut down on paperwork and overcame the challenge of dispatching jobs to drivers in remote locations, often on the road for days, with the MyTrucking driver app.

Prior to MyTrucking, owner David Campbell says it was a matter of phoning drivers, many of whom could be away for days or even weeks at a time, and working in areas with little to no mobile coverage.

The biggest benefit has been the driver’s app, given the remote nature of many of their jobs.

He also rates the new Save and Repeat feature on MyTrucking. “If anyone has a job that requires multiple loads in a day, I upload the job once and at the end of the day the driver loads how many deliveries he’s done for the day himself. It saves a heap of time – and phone calls.”

Best place to get a pie? My brother’s bakery in Flora Hill, Bendigo, Victoria

Favourite MyTrucking feature? All of it – it’s so easy to use

Favourite saying/catchphrase? “I will make it happen”

This MyTrucking success story appeared in the January edition of Owner Driver magazine. 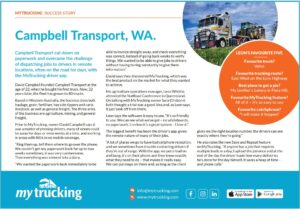